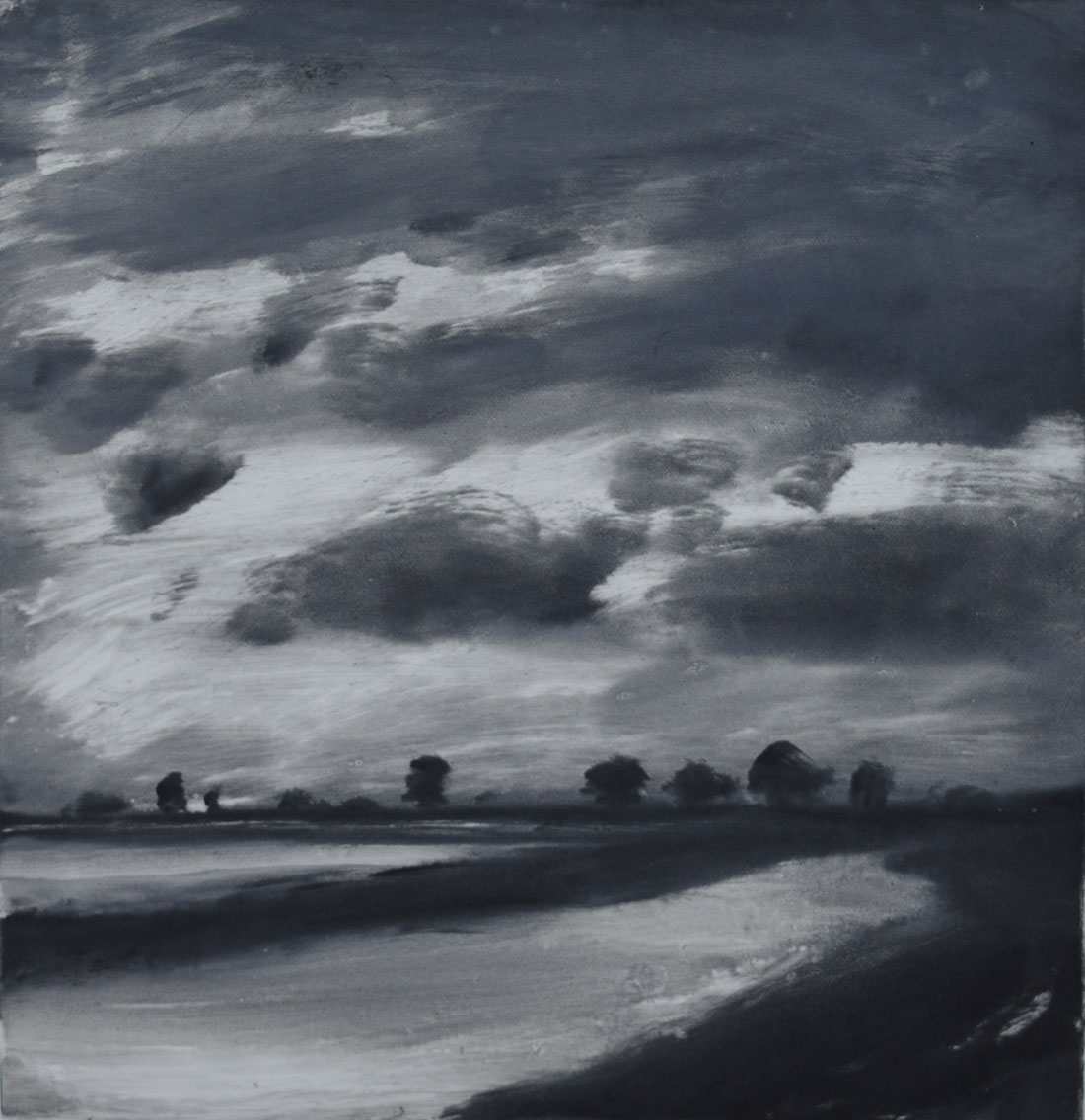 It is the difference between the raw, white and direct light of a midday sun beating down on all things equally, and the horizontal light of evening, firing the strange clouds with reflections …
Théophile Gautier

The north-eastern landscape of Victoria around Kerang first attracted Wayne Viney in 2005 and over the ensuing decade he made further journeys and many drawings of this vast, flat country. Large freshwater lakes and

interconnecting irrigation channels form a capillary-like grid that feeds an important farming belt, but it was the immense and ever-changing skies, which throw reflections upon the lakes’ edges and the canals, doubling, mirroring and creating a visual register of rhythmic abstraction, that makes this Lake Charm area perfect territory for Viney’s aesthetics.

After a decade of controlled colouristic minimalism, Viney, who is recognised as one of Australia’s most accomplished printmakers, takes his signature medium the monotype and returns to his painterly, gestural fluency in order to capture the unique spatiality of this dry land. The linearism, whether diagonals or a long horizon line or a road is compressed into the lower third of the composition, while the rest of the picture is offset by great turbulent skies or billowing clouds. The dramatic contrast between earth and sky is amplified by an acute sense of isolation and powerfully connects the vital forces of nature, the mere human element being incidental.

Exotic clumps of palm trees animate the tree-lines along the banks of the canals, and though seemingly picturesque, are suggestive of the migrational and multicultural history of these inland regions. The trees and the man-made canals attest to possession of the land and how colonial settlement changed the area from a normally arid landscape to a large farming and agricultural food bowl. But Viney’s art is not about historical narrative; rather he is an artist who exalts in the beauty of landscapes and who immerses himself in its pictorial, impressionist representation. His rapid brushwork and handling of the ink, the immediacy of mark-making and the accidental or unexpected way the ink bleeds are for him cathartic and emotionally liberating.  It is not difficult to respond to this sense of exhilaration and, indeed, these monotypes reconfirm Viney as a romantic printmaker.

With a simplified palette of blacks and whites — a conscious choice by Viney — these prints pay homage to the power and complexity of chiaroscuro, a method that offers a three-dimensional effect, especially when the play of dazzling light is sharpened by the contrasts of the two key tones. In Wayne Viney’s hands this subtle and minimal tonal range both unifies the composition and invites us to consider the evening hush when the last sun rays dramatise the visible remnants of the day.  It is precisely at this time of day, when colour recedes into the dark and neutral tones of black and white, that the timelessness of the great rural Australian plains and the immensity and grandeur of their skies are best captured.

This essay was written to accompany Transience: The Lake Charm Series, an exhibition at Port Jackson Press, 1-21 June 2018. 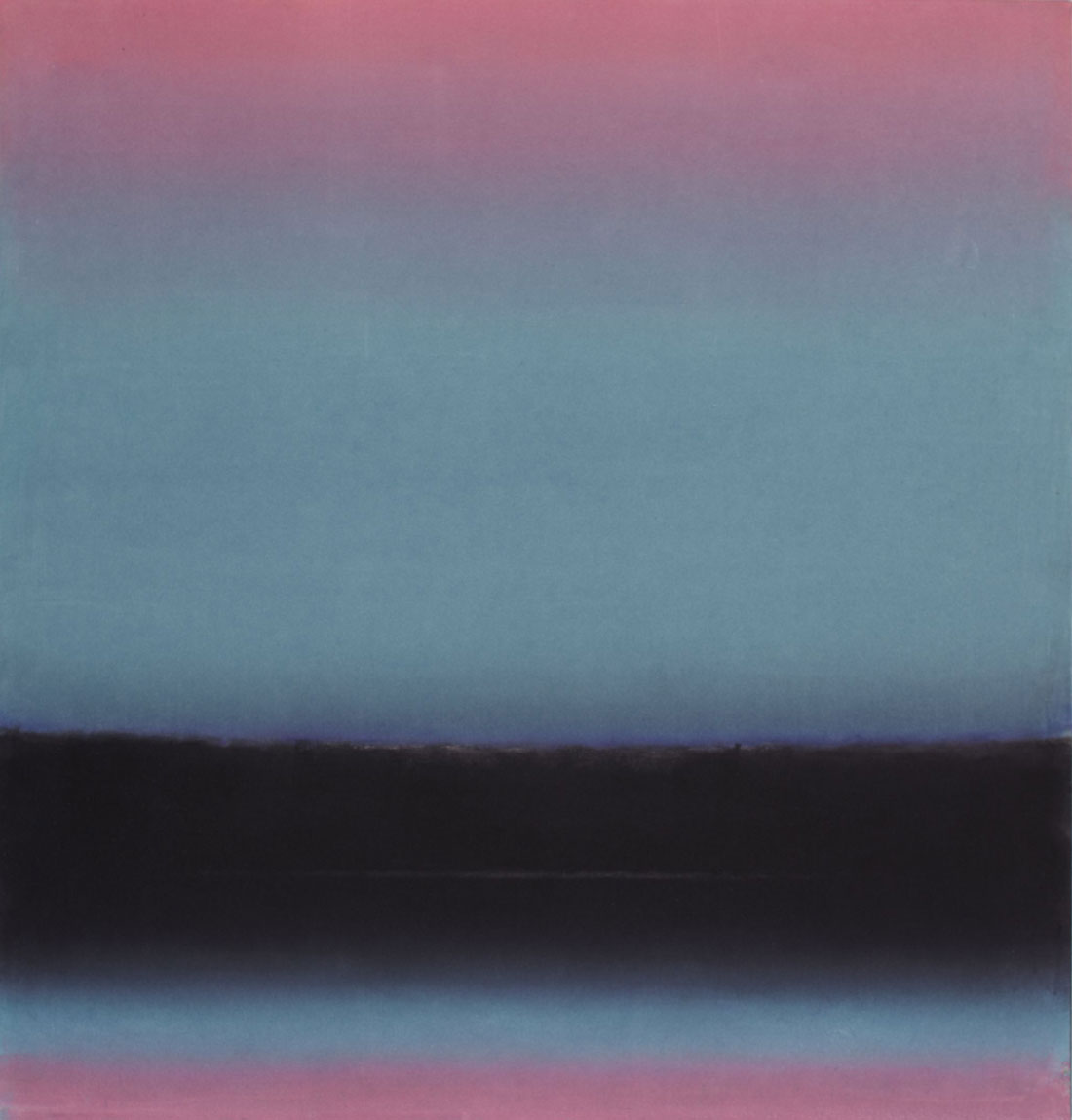 ‘Around the Galleries’
Review of Radiance exhibition
by Dan Rule,  The Age, 17 July 2010

Radiance seems the perfect title for Viney’s latest series of monotypes prints. Known for his stunningly blurred, vaporous landscapes, the Melbourne artist and printmaker has abstracted all but a trace of the lay of the land in this series.

Rather, he plies these works with simple phases of horizontal light – the ambience, perhaps, of the sun’s reflection and refraction from the earth – void of details and topographies. Viney’s reductive, nonetheless beautiful prints

exude a timbre or resonance rather that a representation. Hue, tone and texture are of the essence. 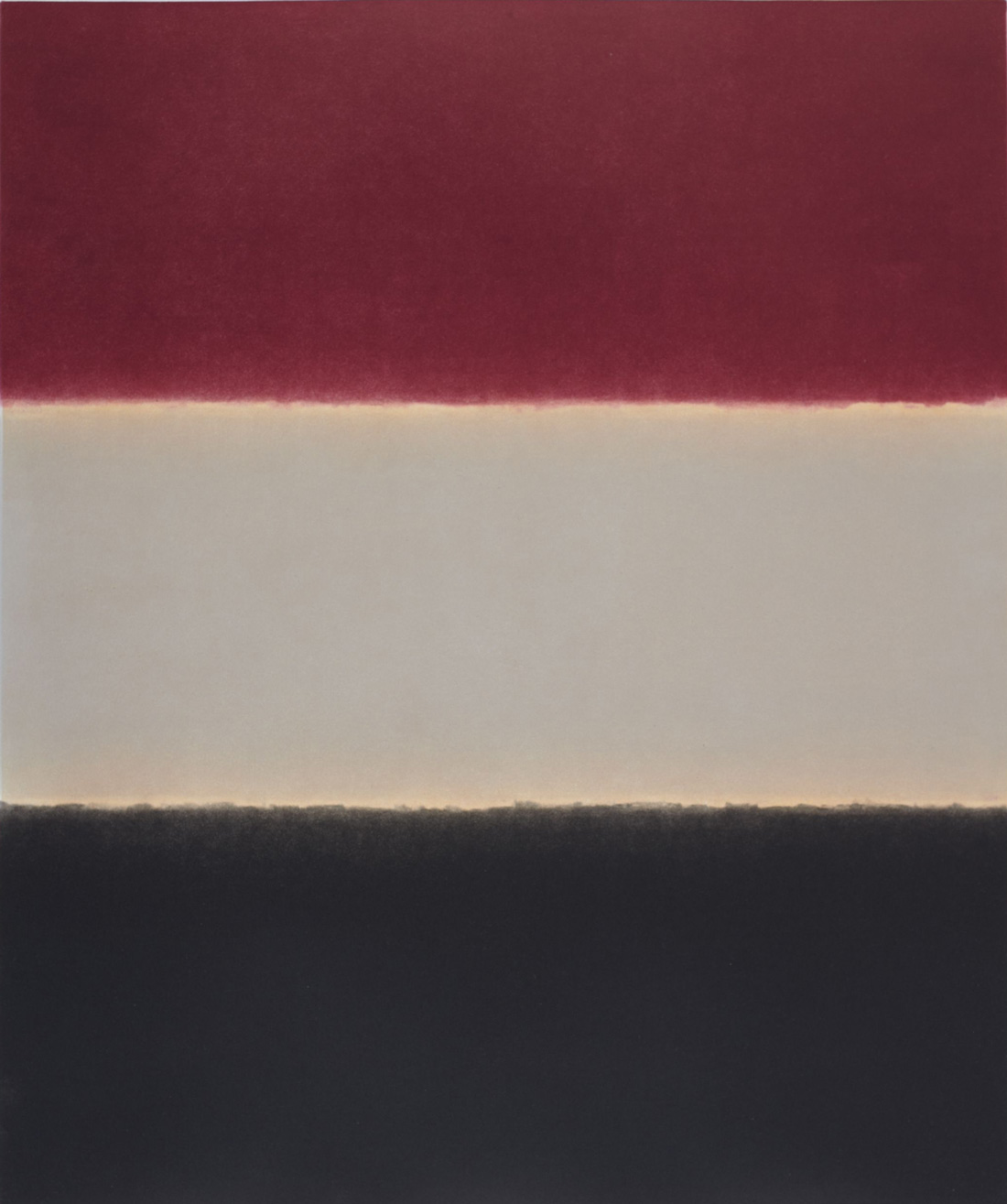 . . . The three or more bands of colour encompassing innumerable shades and variations have been present in Viney’s work since the late 1990s. A neutral tone is generally used to break the duality of sea and sky.

. . . As Viney’s monotypes have emerged from small-scale monochrome landscapes to large colour abstractions, one can discover a journey from Steichen to Sean Scully, from Constable’s tumultuous shining cumulus clouds to Barnett Newman’s zipped landscape of spiritual or emotional turmoil. The work is devoid of obvious physical reverence points. It is a further refinement,

one that steps away from physical reality to an inner world.